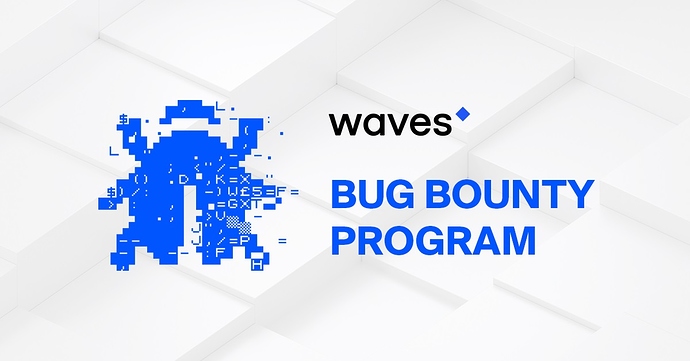 In order to provide the best quality of the product to the community, we are starting WAVES Bug Bounty Program.

The scope of the Program: versions of the Node which currently deployed to official nodes on MainNet. We are interested in security issues, issues which can break the blockchain consensus, issues leading to inoperability of the Node.

Please have a look at the bullets below before starting your hunt!

The value of rewards paid out will vary depending on severity.

WAVES Bug Bounty Panel decides on the severity of the bug based (but not limited) on:

The minimum payout is 1 WAVES and the maximum is 1000 WAVES for the most bugs.
The highly critical bugs can be valued by the WAVES Bug Bounty Panel above the maximum.

Reward sizes are guided by the rules below, but are in the end, determined at the sole discretion of the WAVES Bug Bounty Panel.

Beyond monetary rewards, every bounty is also eligible for listing on our leaderboard with paid WAVES accumulating over the course of the Program.

In addition to severity, other variables are also considered when the WAVES Bug Bounty Panel decides the reward, including (but not limited to):

How to report a bug

The WAVES Bug Bounty Program is an experimental and discretionary rewards program for our active WAVES community to encourage and reward those who are helping to improve the platform. It is not a competition. You should know that we can cancel the Program at any time, and awards are at the sole discretion of WAVES Bug Bounty Panel. You are responsible for all taxes. All awards are subject to applicable law. Finally, your testing must not violate any law or compromise any data that is not yours.

Hello, I found a bug, a token that was not released was released, will I be rewarded for finding this bug?

Hi, we need more details.
Please send it according to the Program rules above.

But what if someone will find a bug that can be sold to someone else for much bigger price then 1000 Waves or $3000?

It turned out this was a very good question.

The minimum payout is 10 WAVES and the maximum is 1000 WAVES.

Good initiative but the incentive is far to low for this!
Come on Waves team, you’ve got over 20k BTC available in your warchest but are to scroodgy to sepnd even 1 BTC for people who find essential bugs?

Thank you @pavlov.ig!
However, it seems to me that you didn’t get the point at all… Adding “for the most bugs” does not solve the issue. The problem is that the community does not agree with the amount of the reward in general. 1000 WAVES is an extremely tiny reward in comparison with the consequences of the damage that can be caused by not reporting the bug. It is what people saying here. Also, I’ve seen the following comment from one of the Users in your Telegram channel (not sure why it is “2k waves” here… but the point is clear):

This again proves my statement above.

And it is good to know that “The highly critical bugs can be valued by the WAVES Bug Bounty Panel above the maximum.” Hopefully, the bonus would be reasonable.
Thanks!

Hello! I found one bug when sending bulk tokens, addresses are deleted from the input field, if you do it manually! Video process here https://vk.com/video?z=video364169331_456239031%2Fpl_cat_updates

Hello, Igor!
This is not a bug, but the normal behavior of the application. Once a second, the test is performed and the line is deleted if it does not match the correct format. The correct format in this case is [“string_address”, “number”]. We understand that in your case this is not very convenient, but this functionality, first of all, is intended for sending to the addressees whose list is uploaded from the CSV file. Alternatively, you can edit your TXT file, add amounts in front of each recipient and paste it through the clipboard.

Привет! Нашел несколько мелких недочетов DEX. Не работает функция свернуть биржевой стакан и количество монет отображается как Кол-Во. А хотелось бы что бы было Кол-во.
Hello! Found some minor DEX flaws. The function does not work to minimize the exchange cup and the number of coins is displayed as Кол-Во. And I would like that would be the Кол-во. Video here https://vk.com/video?z=video364169331_456239032%2Fpl_cat_updates

looking further for this one

The reward for finding the bug is not assessed, as the support for the award said, why then promise?