We propose to remove the limitation on the complexity of a callable function of a dApp script. For this purpose, we suggest adding a new transaction type: Continuation. If the complexity exceeds 4000, the execution of the callable function is split into several stages. The first stage of calculations is performed within the Invoke Script transaction; the further stages are performed within Continuation transactions created automatically by block generators. The sender of the Invoke Script transaction should specify a transaction fee sufficient for the estimated number of stages.

At the moment, a single callable function can perform calculations with a complexity of up to 4000. To implement a more complex logic, a developer is forced to decompose it into several transactions manually.

The idea is to split a large execution into multiple transactions and blocks automatically by the blockchain’s execution environment. The computation cost in each transaction remains predictable, and heavy calculations do not lock the blockchain. A more detailed motivation is given in the Unlimited dApp script complexity via Continuations article.

A block generator that adds an Invoke Script transaction to a microblock performs calculations with a total complexity up to 4000 and saves intermediate results in the internal database. Further, the block generator, the same or another if a new key block is already created, detects an uncompleted calculation sequence, creates a Continuation transaction, and adds it to the microblock, performing the next stage of calculations. The process continues until the script is completely executed or fails.

Suspension of other transactions involving dApp

During all the stages of calculations, the dApp script operates the same blockchain data.

1) Entries of dApp’s own data storage

Due to the suspension of other transactions involving the dApp (see above), the dApp’s data storage entries do not change from the start of the script execution until the end. We add new built-in functions to Ride that allow the dApp to read data from its own data storage:

The dApp script can call these functions at any stage, that is, in any transaction of the calculation sequence.

All external blockchain data used by the dApp script must be obtained at the first stage of calculations. The complexity of the script’s part from the beginning to the last function that reads external data, inclusive, should not exceed 4000.

If the script contains branches, it is not known in advance which branch will be executed. Therefore, the total complexity for all branches is taken into account. Consider the following scheme: 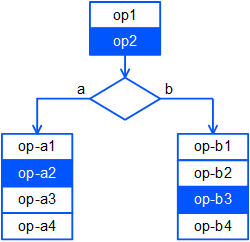 If the operations op2, op-a2 and op-b3 read the external blockchain data, then the total complexity of the operations op1 + op2 + op-a1 + op-a2 + op-b1 + op-b2 + op-b3 must not exceed 4000, otherwise the dApp script cannot be assigned to an account (Set Script transaction would be rejected).

The sender should specify a fee taking into account the maximum possible number of calculation stages and script actions.

The minimum fee in WAVES for an Invoke Script transaction is calculated as follows:

E is the extra fee specified in the extraFeePerStep field,

С is the complexity of the callable function. С/4000 rounded up to the nearest integer is the number of stages in the calculation sequence.

P is the number of payments in smart assets attached to the transaction.

A is the number of script actions (transfers, reissues, burnings) with smart assets.

I is the number of issued assets that are not NFT.

The fee is distributed as follows:

Note: the threshold for saving failed transactions is applicable only to Invoke Script transactions. If the script fails at one of the subsequent stages, the Continuation transaction is saved on the blockchain, and a fee is charged for it.

Distribution of complexity between stages

Consider the complexity of the callable function is 10,000.

1st stage: the block generator that processes the Invoke Script transaction stops script execution before the total complexity exceeds 4000. For example, at complexity 3900, if the next operation complexity is 120.

2nd stage: the block generator that processes the Continuation transaction stops script execution before the total complexity exceeds 8000. For example, at complexity 7950, if the next operation complexity is 80. The complexity of the stage is 7950 – 3900 = 4050.

3rd stage: the block generator that processes the next Continuation transaction executes the remaining operations with a complexity of 10,000 – 7950 = 2050.

Consider the previous example, supposing that:

Note: if the sender specifies the transaction fee more than the minimum of 1.037 WAVES, the remainder will be returned to them even if all stages are successfully completed.

If the Invoke Script transaction fails after the calculations’ complexity exceeds the threshold for saving failed transactions, the sender pays 0.005 + 0.002 + 0.004 = 0.011 WAVES. The unused fee of 1.026 WAVES is returned to the sender.

If the last Continuation transaction fails:

Global idea is interesting, but how I will know how much steps I will need as a user of a service when I click on a button to execute a dApp?

would be reduced to

you can’t. imagine you need to traverse a queue of payouts: you can’t know the amount of steps upfront, so you either pay max possible or what is actually being computed. one way around is to require as max, but return what hasn’t been used.

in the end, computation cost depends not just on the computation itself, but on the data. this has to be respected.